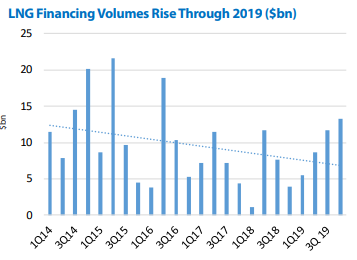 LNG funding activity jumped to a three-year high in 2019 after a sluggish 2018 but could slip back sharply this year as a result of the coronavirus pandemic.

The 2019 figures were boosted by liquefaction which was up 75% and funding in the LNG shipping sector, which doubled. LNG import funding, however, slipped by about 50%.

In 2019 only two new liquefaction project financings were completed, both in the US state of Louisiana. They comprised $5.8 billion for Venture Global’s Calcasieu Pass and $1.5 billion for Train 6 at Cheniere’s Sabine Pass. US liquefaction financing jumped to an all-time high in 2019, but most of it was refinancing of project finance debt that had closed in previous years.

The total funding for 2019 was meant to be much higher because sponsors of the two land-based projects planned for Mozambique had expected to secure around $30 billion in project finance debt in 2019, but the transactions were delayed (see Liquefaction section).